Reviews for the new Watch_Dogs 2 (2016) suggest that Ubisoft Montreal have learned their lesson and created an improved version of Watch_Dogs (2014) (the cyberpunk vigilante) with their newest iteration. But is this really so? When missions proceed according to the same, cumbersome routine, lacking checkpoints, which would have promoted creative play. But instead the player finds himself encapsulated in frustration. When a forgettable cast of Uber cool hipsters tries to change the world by dull-witted catch phrases. And when the game forces the player to navigate its picturesque world by performing pirouettes and many flic-flacs (but it was still fun to play).

A game that, although flawed in some aspects, still portrays the feeling of the cyberpunk vigilante. A dissident who pursues a personal agenda of revenge in the most brutal fashion-but that, nonetheless, discloses the flaws and machinations of a corrupt system.

Entering the virtual Chicago as vigilante

Watch_Dogs (Ubisoft Montreal, 2014) belongs to the genre of the cyberpunk and  confronts the player with a chilling vision of the near future. The fictional Chicago has become one of the most surveilled cities in the world (just like the actual Chicago) because of a newly installed operating system. Developed by the Blume Corporation, the Central Operating System (ctOS) is used to create a smart city based on technological innovation. And thus a future Utopia. 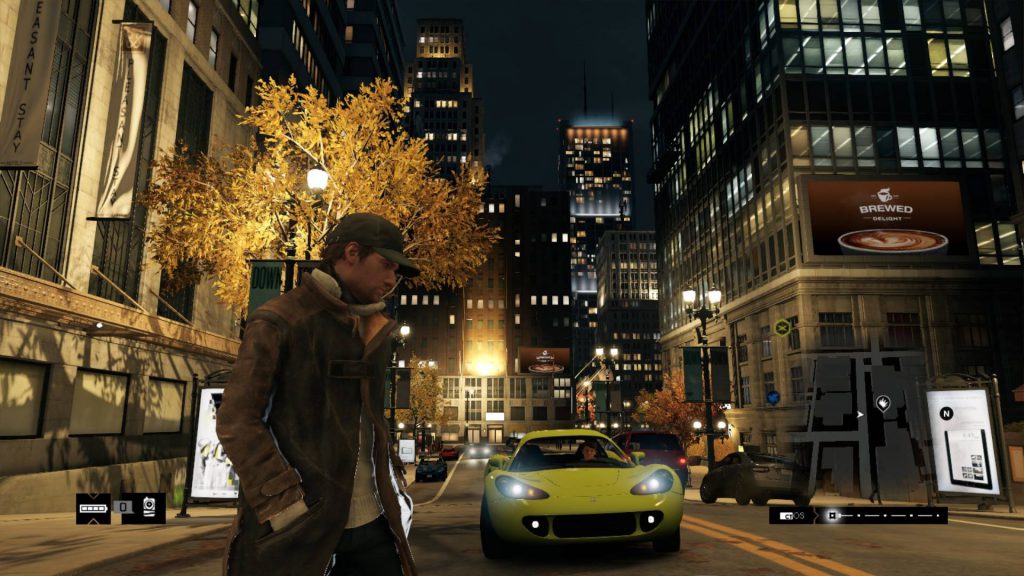 Thereby, the system does more than handle the city’s infrastructure. In addition to controlling and optimising traffic flow, improving the health care system, and promoting environmental awareness, the ctOS facial recognition software reduces crime by calculating the severity of potential offenses . This makes it similar  to Phillip K. Dick’s Precogs in “The Minority Report” (1956). With the promise of security, health, comfort, and limitless connection, the citizens of Chicago are coaxed into believing in this technological Utopia. And one can see them wandering the streets with their heads down, entrapped in the cyberspace of their phones.

To operate on such a level of efficiency, the ctOS is gathering vast amounts of data. These include: income, age, and history of disease, to citizens’ precise locations. In Watch_Dogs, information means power. And this is where the supposed Utopia fails-and cyberpunk vigilantes may misuse it. In a story of corporate intrigue, corrupt individuals, and data heists, various parties use the ctOS to their benefit. One of these is Dermot Quinn, who is involved in cybercrime and human trafficking and is close to the Blume Corporation and Chicago’s mayor Donavan Rushmore.

A story about revenge

In the midst of these intrigues, the player takes control of the hacker Aiden Pierce (the cyberpunk vigilante). His  niece was accidentally killed by Quinn’s men. And his story is thus one of personal revenge. Consequently, his character development remains shallow. Although Pierce meets and is aided by Clara Lille (the temptress and member of the hacker group DedSec) and Raymond Kenney (a former ctOS software engineer), he remains caught up in his thirst for vengeance. In the meantime, there is no sign from hacker group DedSec. This could have led to a collective counter-narrative and perspective on the events. 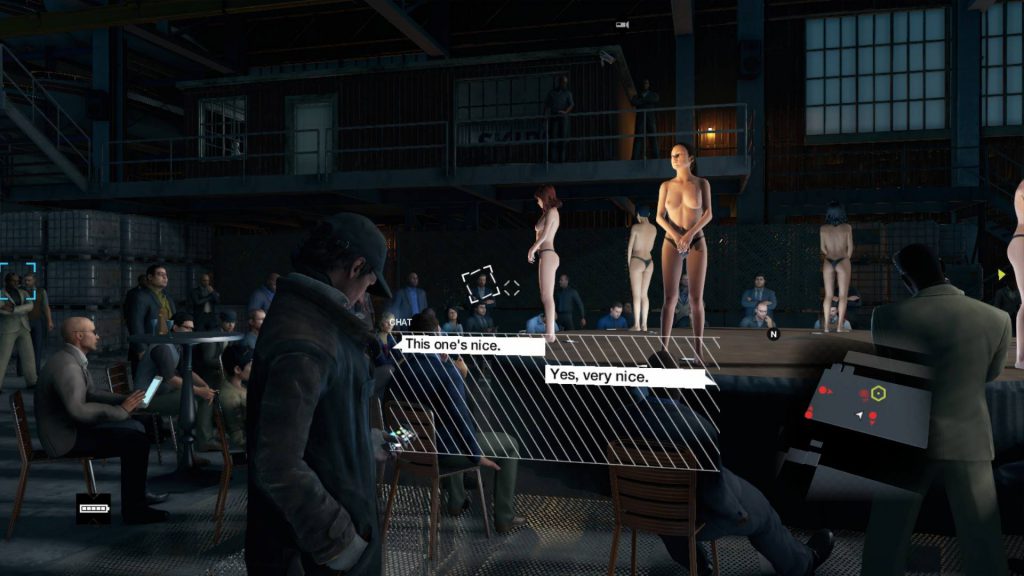 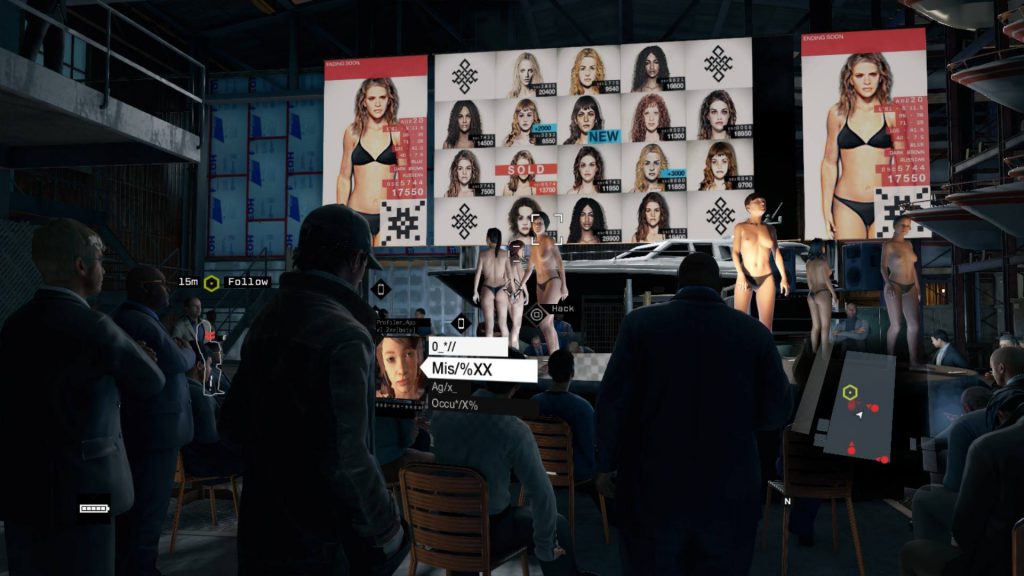 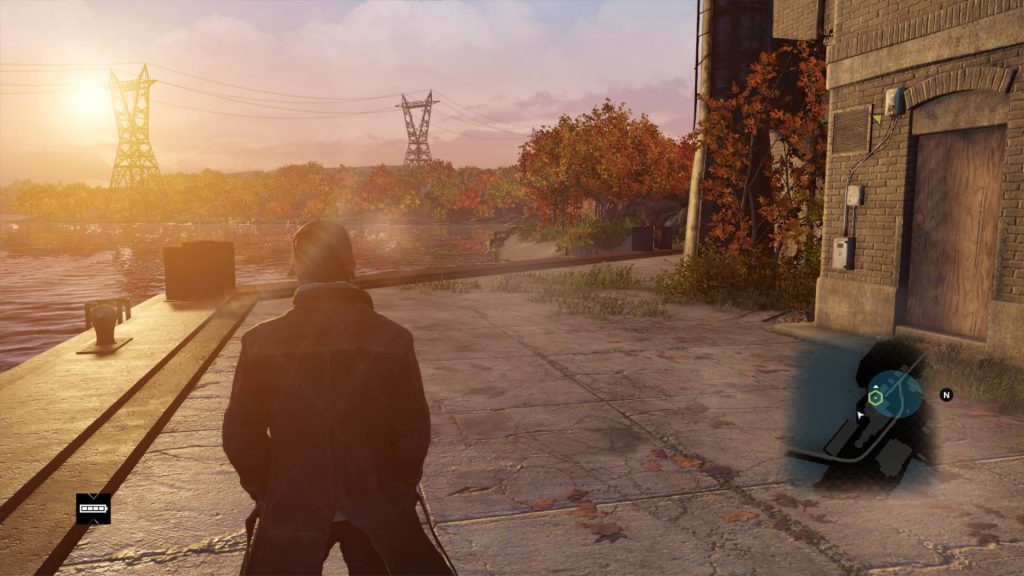 Consequently, through the absence of critical characters and plot developments, reflective distance is left to the player: in his ludic ability to tinker with the ctOS by using his in-game smartphone. Chicago, as such, is at the player’s mercy. For the hacking possibilities are vast and include: control of Chicago’s electric grid, accessing people’s personal information and bank accounts, or intruding into their homes through cameras in their Xbox Kinects.

As a consequence, the player becomes a voyeur who witnesses the citizens of Chicago playing games or engaging in sexual fantasies. Becoming involved in such a trial action is pleasurable without a doubt. But it is also thought-provoking: by having the player ponder these possibilities in real life, and what it means to become a victim.

A place for relaxation

Besides the troubles of the city life, Watch_Dogs allows players (and the cyberpunk vigilante) to explore nature. This offers a regenerative appeal to the technological buzz of Chicago. 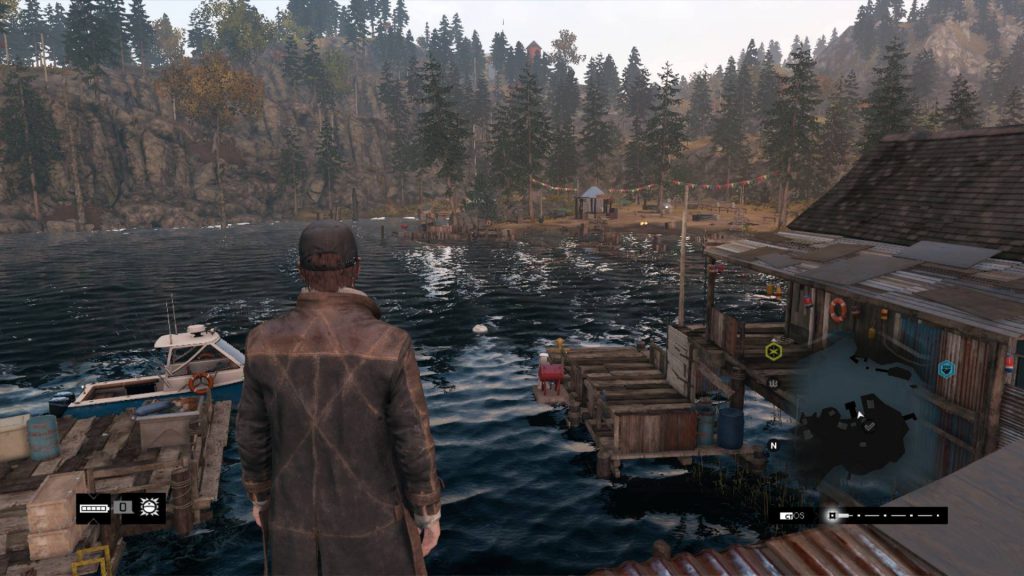 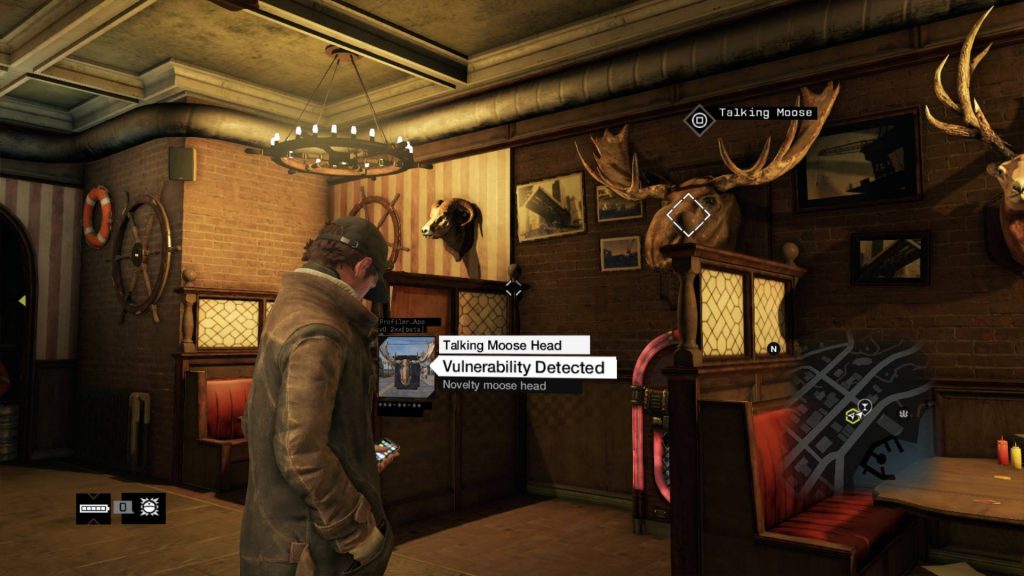 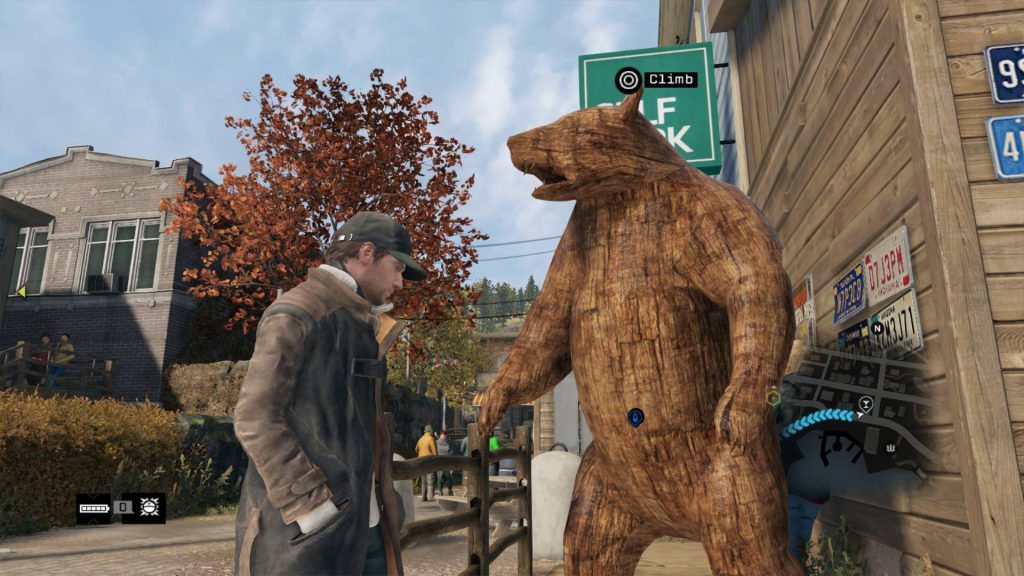 All in all, Watch_Dogs is a critical dystopia of variant. It, however, fails to unfold its subversive potential because the counter-narrative and critical character/plot perspectives remain in the background. The protagonist, Pierce, shows little change and is caught up in personal revenge. And it is only at the game’s conclusion that his attitude changes. 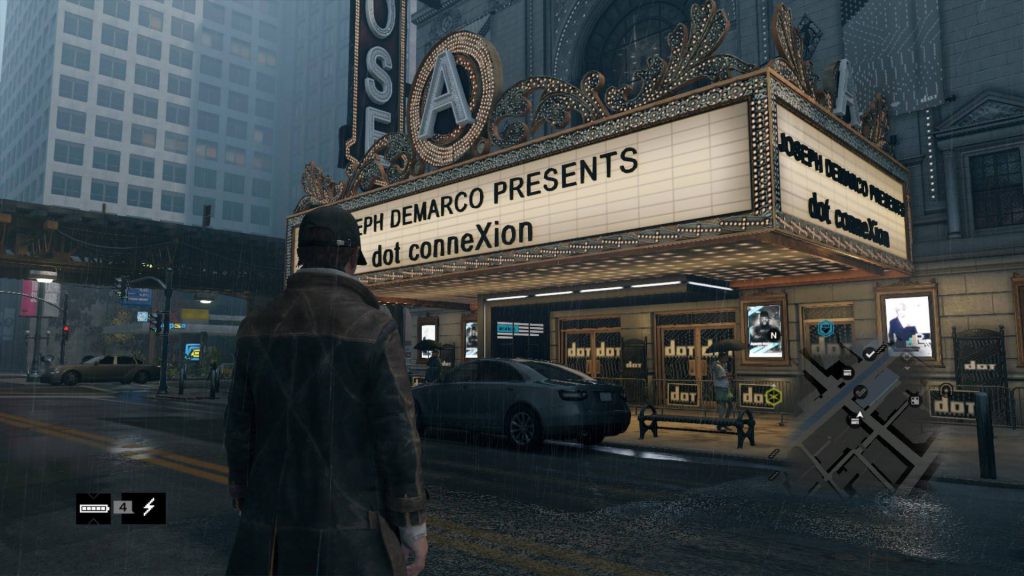 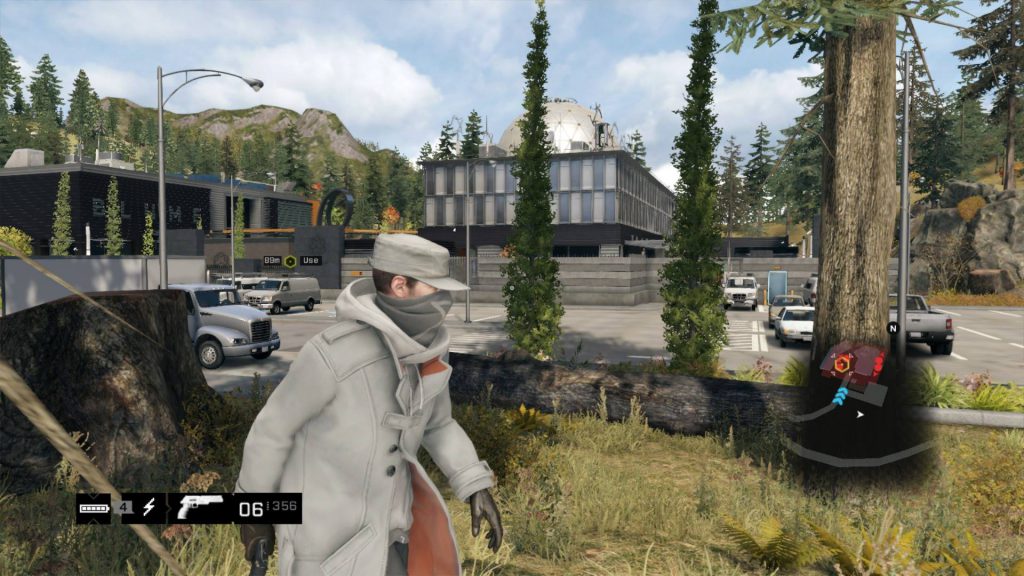 Nonetheless, having experienced Chicago in the act of play, the player may ponder the ramifications of such technology. And what it means if corrupt individuals get their hands on it.